Walking had been realized on biped robots since the 1970s and 1980s, but a major stride in the field came in 1996 when Honda unveiled its P2 humanoid robot which would later become ASIMO. It was already capable of walking, pushing a cart and climbing stairs. A key point in the design of P2 was its walking control based on feedback of the zero-tilting moment point (ZMP). Let us look at the working assumptions and components behind it.

If this is your first time reading this page, I warmly advise you watch this excellent documentary from the NHK on ASIMO. It does a good job at explaining some of the key concepts that we are define more formally below.

The goal of this component is to generate a CoM trajectory \(\bfp_G(t)\) whose corresponding ZMP, derived by:

There are different methods to generate walking trajectories. One of the most prominent ones is to formulate the problem as a numerical optimization, an approach introduced as preview control in 2003 by Kajita et al. and that has since then be extended to linear model predictive control (MPC) by Wieber et al. (also with footstep adaption and CoM height variations). This approach powers walking pattern generation for robots of the HRP series like HRP-2 and HRP-4.

Now that we have a reference walking trajectory, we want to make the real robot execute it. Simple open-loop playback won't work here, as we saw that the dynamics of walking are naturally diverging (walking is a "controlled fall"). We will therefore add feedback to it.

where \(\bfxi^d\) is the desired DCM from the walking trajectory. Given the equation above where \(\dot{\bfxi} = \omega (\bfxi - \bfp_Z)\), this feedback law can be rewritten equivalently in terms of the ZMP:

where \(k_Z = 1 + k_\xi / \omega\), \(\bfp_Z^d\) is the desired ZMP from the walking trajectory and \(\bfp_Z\) is the ZMP controlled by the robot using foot force control. For position-controlled robots such as HRP-2 or HRP-4, foot force control can be realized by damping control of ankle joints, see for instance Section III.D of the reference report on HRP-4C's walking stabilizer. This report is in itself an excellent read and I warmly encourage you to read it if you want to learn more about walking stabilization: every section of it is meaningful. 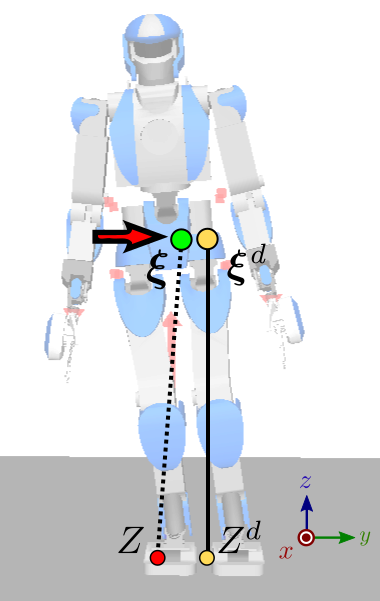 So, what happens with this control law? Imagine for instance that, while playing back the walking trajectory, the robot starts tilting to the right for some reason (umodeled dynamics, tilted ground, ...) As a consequence, the lateral coordinate \(\xi_y\) of the DCM will become lower than \(\xi^d\). As a consequence of the feedback law above, the ZMP will then shift toward \(y_Z < y_Z^d\), generating a positive velocity

Is that it? Well, yes, at least for an overview of the ZMP feedback approach. The main point I didn't mention above is called state observation: in this instance, how to estimate the CoM position and velocity from sensory measurements. On walking control itself, you can check yout the nice Lecture on Walking Motion Control (2013) given by Pierre-Brice Wieber.

Alternatives to the ZMP

The approach we have outlined here is the historically successful one based on ZMP feedback; alternative methods are plenty. For instance, is used by roboticist and YouTuber Dr.Guero developed upper body vertical control to walk the PRIMER-V7 hobby humanoid. This method relies on upper-body rather than ankle motions, and is not based on ZMP feedback.

Source code is a great way to close knowledge gaps left out by research papers. For a step-by-step introduction, you can head to the prototyping a walking pattern generator tutorial which is entirely in Python. For working code used on actual robots, you can check out: