Quadratic programs are a class of numerical optimization problems with wide-ranging applications, from curve fitting in statistics, support vector machines in machine learning, to inverse kinematics in robotics. They are the first step beyond linear programming in convex optimization. We will now see how to solve quadratic programs in Python using a number of available solvers: CVXOPT, CVXPY, Gurobi, MOSEK, qpOASES and quadprog.

A quadratic program (QP) is written in standard form as:

Here \(x\) is the vector of optimization variables \(x_1, \ldots, x_n\). The matrix \(P\) and vector \(q\) are used to define a general quadratic objective function on these variables, while the matrix-vector pairs \((G, h)\) and \((A, b)\) respectively define inequality and equality constraints. Vector inequalities apply coordinate by coordinate, so that for instance \(x \geq 0\) means that every coordinate of the vector \(x\) is positive.

This mathematical formulation means that a QP finds the minimum of a quadratic function over a linear set:

In the 2D illustration above, the level sets of the quadratic function are drawn as dashed ellipses while the linear set of inequality constraints corresponds to the blue polygon. (The description of a polygon, or more generally a polyhedron, by linear inequality constraints is called the halfspace representation.) Since the global optimal of the objective function is outside of the polygon, the solution \(x^*\) of the QP lies on the boundary of this polygon. The set of linear constraints that are saturated at \(x^*\) is called the active set, but that's a story for another post...

Back to the standard form, you will notice that there is no constant term in the objective function. Indeed, it would have no effect on the result of the optimization, which is the location of the solution \(x^*\). For example, the quadratic expression \(\| A x - b \|^2\) of a least squares optimization is written in standard form with \(P = 2 A^T A\) and \(q = -2 A^T b\) (see the example below for a small proof of this).

The standard form also assumes, without loss of generality, that the matrix \(P\) is symmetric. Any matrix \(M\) can be decomposed as sum of its symmetric part \(M^+\) and antisymmetric part \(M^-\), and the latter yields zero in \(x^T M^- x\). Note that some solvers (like CVXOPT) assume that you provide a symmetric cost matrix right away: they won't check this, and will return wrong results if you don't.

Two readily-available QP solvers in Python are CVXOPT and quadprog. They can be installed by:

CVXOPT uses its own matrix type, and it requires the matrix \(P\) of the objective function to be symmetric. To be on the safe side, you can wrap it as follows:

The quadprog module works directly on NumPy arrays so there is no need for type conversion. Its matrix representation is equivalent to the standard form but combines inequalities and equalities in a single matrix-vector pair:

In these two functions we assume that the QP has inequality constraints. For more general functions that handle all combinations of inequality, equality and box-inequality constraints \(lb \leq x \leq ub\), or if you want to try out other solvers, you will find a unified solve_qp function with a solver keyword argument in the qpsolvers library.

For a small example, let us see how to solve:

This problem is in linear least squares form. Denoting its cost function by \(\| M x - b\|^2\), we can convert it to QP form as follows:

We can finally compute the solution to the least squares problem using either of our QP solvers:

In the following benchmark, I compared six different solvers. Three of them are numerical, which is the approach we have seen so far:

The three others are symbolic, meaning that if you dig into their API they allow you to construct your problem formally (with variable names) rather than using the matrix-vector representation. This is convenient for big sparse problems, but slower and small problems such as the one we are looking at here. The three symbolic frameworks I tested are:

Note that ECOS and MOSEK are actually SOCP solvers, SOCP being a class of problems more general that QP. Here is a sample of computation times on my machine:

For further investigation, let us generate random problems of arbitrary size as follows:

The Toeplitz matrix used to generate inequalities is just an upper-tridiagonal matrix with coefficients 1, 2, 3, all other coefficients being zero. This matrix is sparse but represented by (dense) NumPy arrays here. Using the function above, I generated a benchmark for problem sizes ranging from 10 to 2,000, averaging computation times over 10 runs for each point. Here are the results: 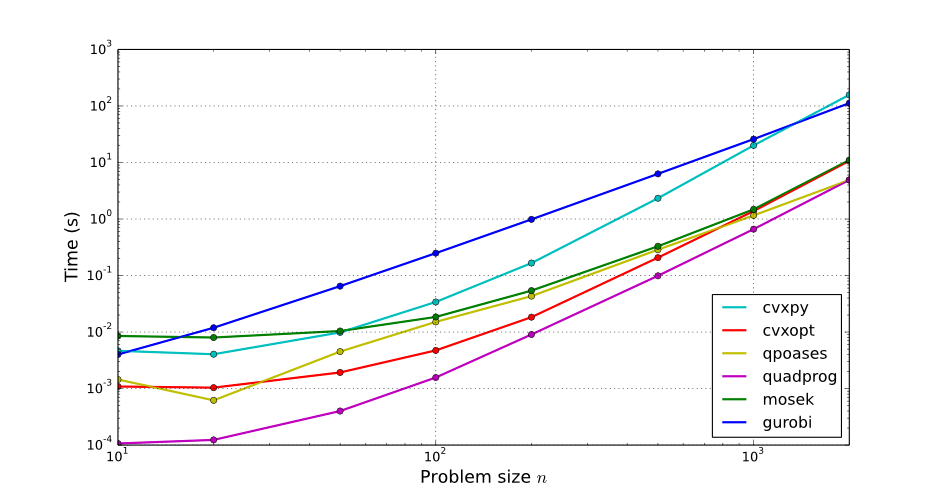 The bottom line of this small comparison is that quadprog, which implements the Goldfarb-Idnani dual algorithm, simply rocks. More generally, active-set solvers (quadprog and qpOASES) perform best on these dense problems. To see the benefit of sparse solvers like MOSEK, one would have to use sparse matrix representation, which I didn't do in this example. Also, the performance of CVXPY here does not illustrate that of its underlying solver (ECOS), as it turns out calling the solver directly is much faster than going through CVXPY.

One last note on this benchmark is that all performances reported here are for cold start, that is to say, problems are solved from scratch every time without a good initial guess. One reason why qpOASES is a bit slow here is that it is designed (e.g. in terms of memory allocation) for solving series of QP problems that are close to each other, so that the solution to one can be used as initial guess to solve the next problem faster (this is known as warm starting). You might want to give qpOASES a closer look if you are in such scenarios.

You can run this benchmark on your own computer: the script is called benchmark_random_problems.py and located in the examples folder of the qpsolvers repository. Since the publication of this post, the library has grown to include more solvers (OSQP, qpSWIFT, SCS, ...) and features such as box inequalities.

Thanks to all those who have contributed to the conversation so far. Feel free to leave a reply using the form below, or subscribe to the  Discussion's atom feed to stay tuned.