Contact stability is a condition used to check the feasibility of robot motions. It should not be confused with the notion of (Lyapunov) stability, a notion from control theory used to formalize the performance of a controller. 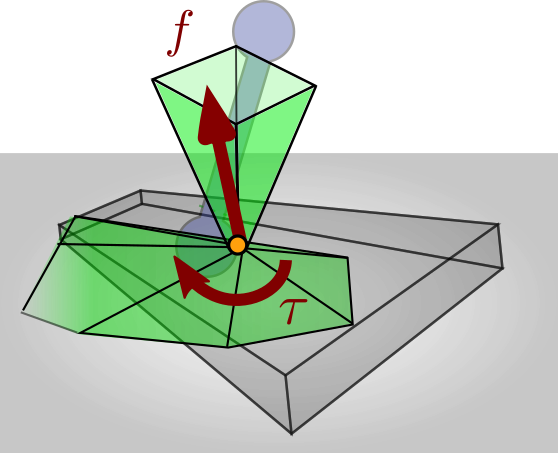 Contact is maintained as long as its wrench stays inside the 6D friction cone.

Everything starts with a mobile robot, i.e., a robot that is able to establish and break temporary contacts with its environment. Think for instance of a humanoid that alternatively plants its feet on the ground to walk. At each contact, the sum of forces exerted by the environment on the robot is represented by a contact wrench. As long as the contact is maintained, this wrench will lie inside its 6D friction cones. The contact breaks are switches to a different contact mode as soon as its wrench hits the boundaries of this friction cone.

As the robot moves, its Newton-Euler equations of motion induce a coupling between the motion's whole-body momentum (linear and angular) and all contact wrenches. If there exists no set of wrenches that simulatenously lie in their friction cones and sum up to the whole-body momentum, the motion is infeasible. When such wrenches exist, the motion may be feasible. This latter condition is known as weak contact stability:

Definition (Pang and Trinkle): a motion of the robot is weakly contact-stable if and only if there exists contact wrenches summing up to its whole-body momentum.

The bottom line of these definitions is to avoid contact switches as best as possible. For a concrete example, think of these switches as follows: 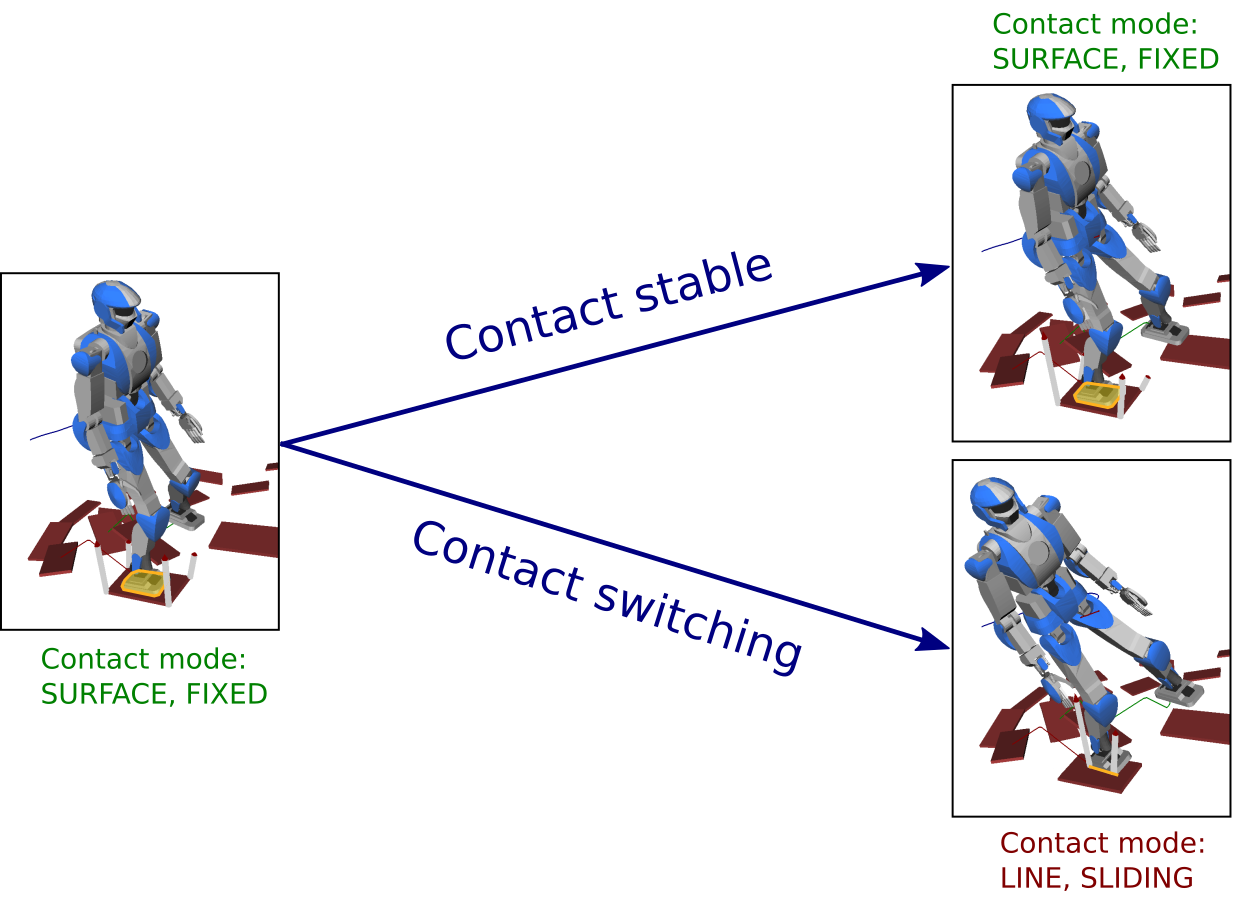 In practice, only a few contact modes are exploited by current humanoid controllers. Roughly, only two contact modes: fixed (full) contacts, and no contact. Detecting contact switches on real robot, or providing a controller that would be general enough to deal with multiple contact modes, is still a widely open question, as of 2016.

In practice, checking contact stability for a given robot motion amounts to solving a Quadratic Program (QP). Let \((\bfpdd_G, \dot{\bfL}_G)\) denote the centroidal momentum of the motion, which is the whole-body momentum taken at the center of mass \(G\). Then, feasible contact wrenches exist if and only if a solution to the following QP can be found:

where \(\bfw_{C_i} = (\bff_i, \bftau_{C_i})\) is the vector of coordinates for the \(i^\mathrm{th}\) contact wrench taken at a contact point \(C_i\) and in the world frame. The matrix \(\bfF\) describes a linearized friction cone model in the local frame, and is thus applied after a rotation \(\bfR_i^T\) of wrench coordinates from the world to the local contact frame.

When contact stability needs to be checked more than once, it becomes more profitable to compute frictional wrench cones rather than solving quadratic programs.

The notions of contact modes is pervasive in the works of Jeffrey Trinkle, and was I think coined by him. My favorite paper in this line computes wrench cones for planar rigid-body contacts, and was a fruitful basis to apply contact wrench cones to humanoid locomotion. Before wrench cones provided a faster way to test contact stability, Boyd and Wegbreit computed optimal contact forces by solving convex optimization problems (that become quadratic programs when using linearized friction cones).