The best solution to install OpenRAVE today is to build from source, which fortunately is not so difficult. Instructions from the official documentation suggest installing pre-built packages from the OpenRAVE PPA, however these packages are not up-to-date (as I write these lines, the latest update of the main OpenRAVE package is from two years ago).

First, make sure the following programs are installed on your system:

Next, you will need to install the following libraries, which are available from the Ubuntu package repository. (I made this list by running cmake again and again on a fresh system until no error remained.)

The only package for which you will need the OpenRAVE PPA is collada-dom:

Once all this software is installed, clone the latest_stable branch of OpenRAVE from GitHub:

At the time of writing these instructions (November 2015), the latest commit on this branch is 5cfc7444.... If you are OK with running an old version of the software, you can check it out to raise your chances of a successful install:

What follows is the default procedure to build projects with CMake:

If you encounter an error during the make, you can check out the troubleshooting OpenRAVE installation page for a small list of known problems and fixes.

Finally, you will need to add OpenRAVE to your Python path, e.g. by putting the following lines in your .bashrc or .zshrc:

You can check that your installation works by running one of the default examples. For example:

should fire up the graspplanning example: 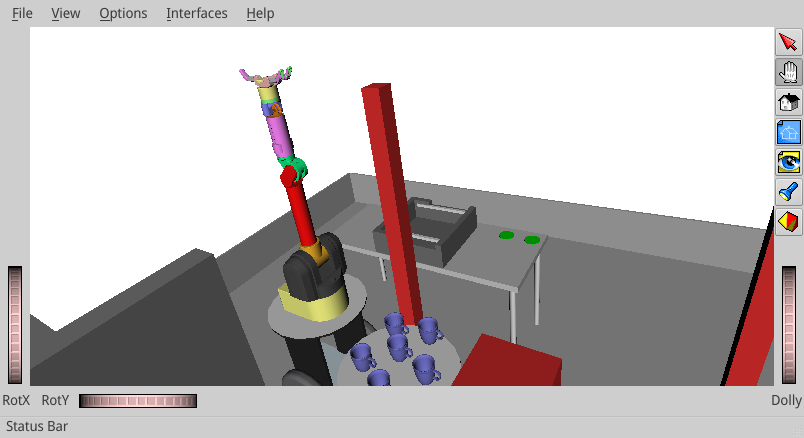 You may see some messages printed in yellow on your command line (e.g. the ones mentioning a missing libconfigurationcache.so). These are just warnings that won't prevent your installation from working.

Now that your software is up and running, you can check out how to set up your first environment.