The equations of motion describe the motion of a physical system as a function of time and controls. In their most general form, they are written:

These equations provide a mapping between the control space (the commands that we send to actuators) and the state space of the robot (what we want to control in practice: the robot's position and velocity).

As a simple example, imagine a block sliding on a table, which we can see as a 1-DOF system with coordinate \(x\). The operator applies a horizontal force \(u\) that pushes the block forward. 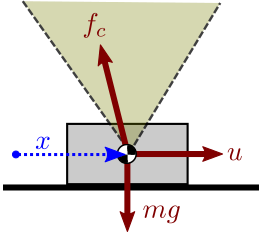 In robotics, we make the following assumptions: 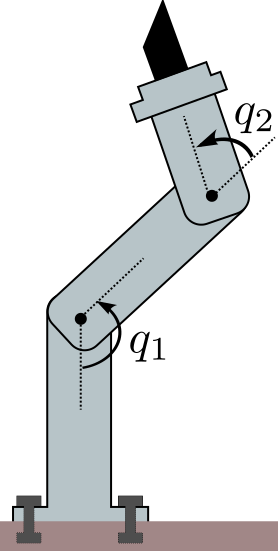 Manipulators are a particular type of articulated system where at least one link is fixed to the environment. We suppose that the fixation is strong enough to withhold any effort exerted on it. Under these assumptions, the equations of motion for a manipulator can be written:

Computation of the inertia matrix

Another significant point is that the matrices and tensors of the formula above can be computed by inverse dynamics. For instance, in OpenRAVE one can use Robot.ComputeInverseDynamics to compute each of the three terms

Note how there is no need to set the robot's velocity in the function above, as ComputeInverseDynamics computes separately the three terms m, c and g. 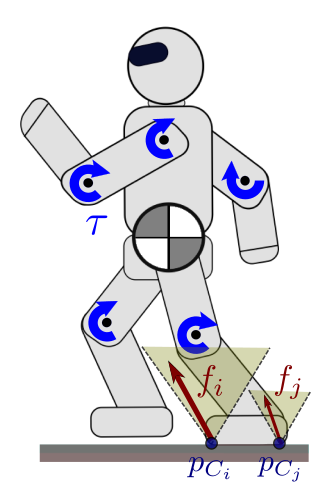 Contrary to manipulators, mobile robots such as humanoids can make or break contacts with the environment. To fully describe their position in space, it becomes necessary to add six coordinates to the vector of joint angles, accounting for the position and orientation of a base link with respect to an inertial frame. If the robot has \(n\) degrees of freedom, this means that \(\q \in \mathbb{R}^{n + 6}\) [3]. As the vector of actuated torques is still \(\bftau \in \mathbb{R}^n\), humanoids are underactuated systems: they cannot control directly all their degrees of freedom.

The contact constraint between a manipulator and the environment was implicitely enforced, as the vector of joint angles was independent from the world position of the robot. With mobile robots it is not the case any more, and contacts need to be actively enforced by contact constraints.

Contact points \(C_i\) are taken at the interface between robot's links and the environment. In the case of surface contacts, when a robot's surface is in full contact with an environment surface (such as a foot on the floor), it is sufficient to take \(C_i\)'s at the vertices of the contact polygon [Caron2015].

Surface contacts (such as a flat foot on the floor) can be modeled by using three or more point contacts, yet at the cost of a redundant representation, which can e.g. prevent the application of time-optimal retiming or other methods that required non-redundant force variables. A non-redundant alternative to this is to use frame contact constraints.

where \(\calJ_C\) is the manipulator jacobian of the contact frame rooted at \(C\), obtained by stacking:

Under frame contact constraints, the equations of motion become:

where \(\bfw_{C_i} = [\bftau_{C_i}\ \bff_i]\) is the contact wrench exerted by the environment on the robot at the link \(i\) to which \(C_i\) belongs. See Chapter 2 of [Featherstone2008] for an excellent introduction to wrenches and, more generally, to spatial vector algebra. The order of \(\bftau_{C_i}\) and \(\bff_i\) does not matter when taking the vector representation of a wrench. However, here it needs to be consistent with the structure of the manipulator jacobian: if the rotational jacobian is stacked first, then the resultant moment needs to come first in the wrench.