Inverse kinematics (IK) is the field of robotics concerned with computing motions (velocities, accelerations) that achieve a given set of tasks, such as putting a foot on a surface, moving the center of mass (CoM) to a target location, etc. These tasks can be defined by a set \(\bfx = (x_1, \ldots, x_N)\) of points or frames attached to the robot, with for instance \(x_1\) the CoM, \(x_2\) the center of the right foot sole, etc. The problems of forward and inverse kinematics are:

Let us consider the task of bringing a point \(\bfp\), located on one of the robot’s links, to a goal position \(\bfp^*\), both point coordinates being expressed in the world frame. When the robot is in configuration \(\bfq\), the (position) residual of this task is:

If the Jacobian were invertible, we could take \(\qd = \bfJ^{-1} \bfv\). However, that’s usually not the case (think of a point task where \(\bfJ\) has three rows and one column per DOF). The best solution that we can get in the least-square sense is the solution to:

For this solution to work, the time step \(\delta t\) should be sufficiently small, so that the variations of the Jacobian term between \(\bfq\) and \(\bfq + \qd \delta t\) can be neglected. The total variation is

where \(\bfH(\bfq)\) is the Hessian matrix of the task. This matrix is more expensive to compute than \(\bfJ\). Rather than checking that the variation above is small enough, a common practice is to multiply the velocity residual by a proportional gain \(K_p \in [0, 1]\): 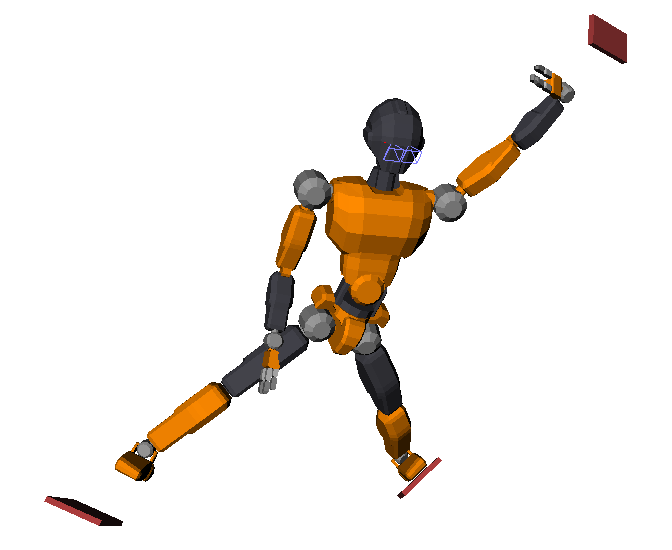 In practice, we can set implicit priorities between tasks by having e.g. \(w_i = 10^4\) for the most important task, \(w_i = 10^2\) for the next one, etc. This is for instance how the pymanoid IK is used in this paper. This solution emulates the behavior of a hierarchical quadratic program (HQP) (unfortunately, there has been no open source HQP solver available as of 2016–2021). See this talk by Wieber (2015) for an deeper overview of the question.

Inequalities between vectors being taken componentwise. This time, the pseudo-inverse solution cannot be applied (as it doesn’t handle inequalities), but it is still possible to use a QP solver, such as CVXOPT or quadprog in Python. These solvers work on problems with a quadratic cost function and linear inequalities:

The formulation that we have seen here is implemented in Python in pymanoid. Check out for instance its humanoid posture generation example. If you have further questions, great! Feel free to ask them in the corresponding IK section of the pymanoid forum.

One efficient technique to make the IK more numerically stable is to add Levenberg-Marquardt damping, a form of Thikonov regularization where the damping (regularizing) matrix is chosen proportional to the task error. See (Sugihara, 2011) to learn more about this.

Whole-body control at the acceleration level is currently more common than the velocity level presented here. Implementation details have been reported for instance for ladder-climbing with the HRP-2 humanoid, or this one with a torque-controlled humanoid. The former is implemented in the Tasks C++ library that powers the mc_rtc control framework.