Autonomous planning and execution of motions on a humanoid robot.

State of the art

Current implementations are closer to the following:

Assuming good trajectory tracking is a holonomic approximation, but humanoids are subject to a nonholonomic constraint. Nonholonomy can be addressed with a continuous replanner updating the reference trajectory in real time.

How to attack the problem

Problem: find a trajectory from the robot's current state to some goal state.

Trajectories t↦q(t) in the configuration space C are paths in the state-space X.

Kinematic planning is done in the configuration space C of the robot.

The main challenge is collision avoidance

Build a roadmap (graph) G=(V,E) over the configuration space C of the robots. Nodes are configurations V={q1,q2,…} and edges represent paths.

A roadmap planner turns a local planner into a global one, enforcing additional constraints such as collision avoidance.

Single-query model: try to connect the initial configuration to the goal as fast as possible. (LaValle et al., 1998)

The planner can tell in finite time whether there are solutions, and if so find one.

If there are solution, the planner will find one given enough computation time:

Unless the planner finds a solution, it is impossible to distinguish the cases where (1) more extensions are required, or (2) the problem has no solution.

Both PRM and RRT are probabilistically complete for kinematic path planning.

The RRT-Connect algorithm is probabilistically complete and vertices [of the roadmap] converge to a uniform distribution over Cfree.

To take all into account, kinodynamic planning is usually done in the state space X, which is by nature more complex than C.

The steering function is the local planner that connects two configurations x1 and x2 by a trajectory x:[0,T]→C with x(0)=x1 and x(T)=x2.

A perfect solution can be found mathematically, as e.g. for Reeds and Shepp curves used in non-holonomic planners. (Laumond et al., 1998)

Control functions u(t) are sampled and their response simulated by forward dynamics. (LaValle, 2001) Applies to a wide range of systems, but not humanoids.

When x′→x, the interpolation from x to x′ stays within a neighborhood of x and its accelerations converges to ∥˙q∥∥Δq∥∥Δ˙q∥, the discrete acceleration encoded in Δx.

Planning in space and time

The state space X has:

Acceleration-compliant interpolation functions are not straightforward to find for multi-DOF systems.

Decoupling of the state space

Followed e.g. by (Kuffner et al., 2002), yet with limitation to quasi-static trajectories (no dynamic motion).

Converts a path q(s) into a feasible trajectory q(s(t)) with minimum duration T.

How to go through contact switches dynamically, i.e. without stopping at quasi-static configurations.

Retiming after planning is highly inefficient. For example, if the path is dynamically unfeasible 5% of the start, the remaining 95% of path planning computations were unnecessary.

Limiting curves in the phase-space (s,˙s) of a path q(s).

The AVP-RRT planner separates path and velocity planning thanks to AVP.

We extend existing TOPP methods to find the interval of reachable velocities along a path.

Integration with a configuration-space RRT where nodes are augmented with velocity intervals (q,[vmin,vmax]).

Double-pendulum with low torques.
Requires multiple swings in order to lift up.

Contact forces fi should lie inside their friction cones to avoid transitions towards other contact modes (e.g. sliding).

Friction can be equivalently expressed by a Contact Wrench Cone (CWC):

We derived the analytical formula of the CWC for rectangular contact surfaces (foot shape of current humanoids). There is therefore no additional cost in using this minimal, non-redundant representation.

Structure of the CWC

An original discovery of our study:

Application to a one-foot motion

The CWC enables the use of TOPP. Below are two retimings of the same input:

Contact forces and the centroidal momentumof the system are bound by the relation:

See e.g. (Wieber, 2008) for a proof of this result.
It derives from the assumption that internal forces are conservative (d'Alembert's principle).

The previous equation of motion rewrites to

That is to say, wgiO=AgiOf, where wgi is the gravito-inertial wrench. Meanwhile, four-sided linearized friction cones can be written:

Question: what is the image of inequalities Bf≤0 by the linear mapping w=Af?

For a subset P of Rd, the following statements are equivalent:

Adapted from the Polyhedral Computation FAQ.

Libraries such as cdd (C++) and pycddlib (Python) allow for efficient conversion between H- and V-representations. In particular, for cones:

On top of this derivation, we applied the GIWC to two problems: 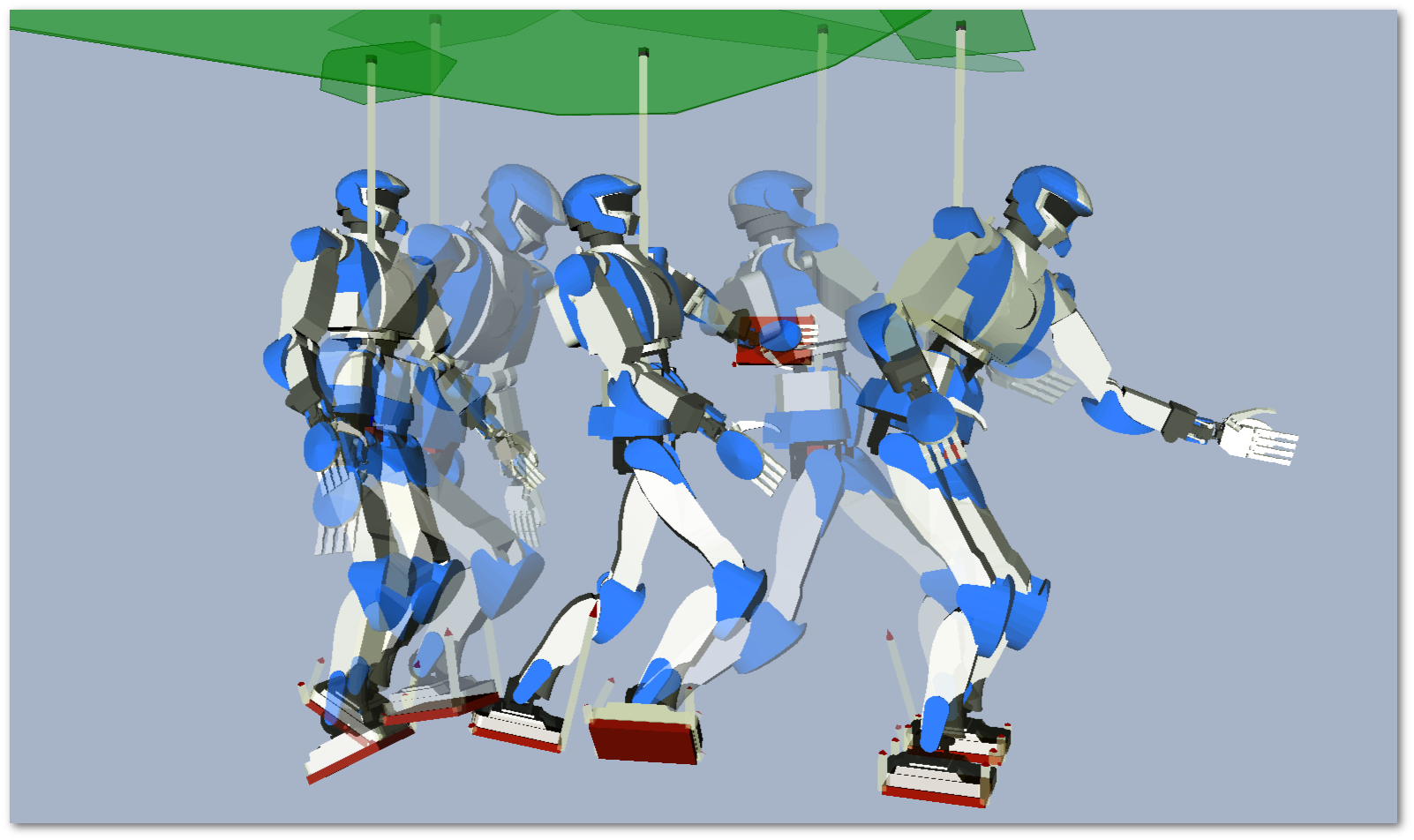 Previous definition: the point on the floor where the moment of the gravito-inertial wrench is vertical. (Sardain & Bessonnet, 2004)

If the motion is dynamically balanced by valid contact forces, the ZMP lies in the convex hull of ground contact points.

The resultant moment is not zero at the ZMP (it is aligned with the ground normal).

A pendular model is (a particular mode) embedded in the equations of motion. (Kajita et al., 2001) Indeed, the dynamic equilibrium equation implies that: ¨xG=g+¨zGzG−zZ(xG−xZ)−˙LGym(zG−zZ) and similarly for ¨yG.

ZMP of a Wrench

ZMP of a wrench (existing definition)

The full support area S of the ZMP in the plane Π(O,n) is the image of the complementary wrench cone by the equation above.

Vertices of the Full Support Area

Vertices are located at the intersection of the plane with friction cones (= contact points on horizontal floor, but not in general).

We will sort these vertices into two polygons:

If one of the two polygons P+ or P− is empty, S is equal to the other.

Let D:=P+−P−=conv({r1,…,rk}) denote the vertices of the Minkowski difference. The support area S is the reunion of two polygonal cones:  C+=P++∑iR+ri and C−=P−+∑iR+(−ri). In particular, when P+∩P− has non-empty interior, S covers the whole plane Π(O,n).

Now, we know how to compute the ZMP support area in any virtual plane, including those above the robot. With the latter, we get a:

The control law equation becomes ¨xG=ω2(xG−xZ), where this time ω:=√g+¨zGzG−zZ.

Even on a horizontal floor, the support area is smaller than the convex hull of ground contact points.

The linear pendulum (LP or LIP) model assumes that ˙L=0, i.e., the angular momentum is regulated to a constant value.

Previous works also assume ¨zG=0, i.e., the COM is regulated to lie in a plane.

Although it was previously unnoticed, these regulations constraint the GIWC, and therefore shrink the ZMP support area.

A novel algorithm based on the double-description method to compute the pendular support area (after shrinking due to ˙L=0 and ¨zG=0).

Integration within a COM-ZMP trajectory generator and validation in simulations.

The steering idea of putting motion planning into the fast feedback loop took us in a journey through:

The components we described integrate with each other as follows:

Always a great deal of open questions. For instance, what about contact planning?
The road ahead opens to many more journeys!